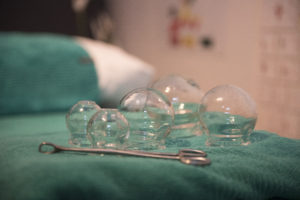 Ever since Micheal Phelps appeared at a swim meet with reddish circles marking his back and shoulders several years ago, cupping has been thrust into the spotlight as a “new” form of alternative medicine. Cupping Therapy is actually a form of traditional Chinese medicine, which teaches that diseases that are caused by localized congestion in various parts of the body. It’s a highly effective way of applying acupressure to the skin, based on techniques used in Chinese medicine as well as the traditional medicine of Egypt, Greece and the Middle East. How does cupping work?

Acupuncture cupping works by placing small cups, usually made of glass, that have been heated, on various acupressure points of the body. Normally, the acupuncturist or therapist will wave a burning cotton ball soaked in alcohol inside the cup to quickly to create a vacuum. The warm cups are placed in specific areas, creating negative pressure, which is used to draw out toxins and other fluids through the skin. Although the heat is not felt by the person receiving the treatment, the cups cause a pulling sensation as the skin is lifted. Cups are normally left on the skin for five to fifteen minutes. Some therapists may choose to add a lubricant to the rim of the cups so that they can be moved along the back or shoulders as needed. When the treatment is finished, each cup is removed by pressing the skin beside it, allowing air to leak in to release the vacuum seal.

Why should I have a cupping treatment?
Cupping is used to improve circulation and stimulate the peripheral nervous system. According to its Traditional Chinese origins, it acts by drawing out the cold, wind and damp from the body, in order to rebalance Yin Yang and Qi energy. Cupping treatments can be used to draw out toxins and to treat back and muscle pain, hypertension, pneumonia, arthritis, menstrual cramps and the common cold.

Cupping therapy works by lifting the body’s connective tissue, loosening any adhesions and restoring blood flow to areas of the body that have been restricted. It is an excellent treatment for stress, fatigue, aches and pains and is often recommended for new moms.

Cupping therapy is also gaining a lot of attention for its beneficial effects in treating rheumatoid arthritis in a natural way. It helps sufferers by reducing the pain and inflammation felt at the affected joints. According to a recent study in the Egyptian Journal of Immunology, using cupping therapy combined with conventional treatments resulted in a noticeable improvement in pain and in the rheumatoid arthritis disease markers found in patients who received treatments.

As a complementary method to deep tissue massage, cupping can be used to treat very tight muscles, by enhancing the body’s ability to drain toxins and inflammatory substances, stimulate the nerves and allowing fresh blood flow to various muscles. Many people who receive cupping treatments say that it feels like one of the deepest massages they’ve had, but one that takes only 5-10 minutes.

Is Cupping Therapy Safe?
Cupping Therapy is a very safe treatment when performed by an experienced and qualified acupuncturist or cupping therapist. It should not be done on people with a high fever, ulcerated sores or on any areas of the body with a thin layer of skin. If you are planning on having a cupping treatment, you should be aware that it may leave areas of bruising, which are not dangerous, but may take several days to disappear completely. The marks do have a great benefit – they help the therapist in diagnosing different conditions. The darker the mark that is left by a certain cup, the more stagnation there is in the surrounding muscle areas. For example, if you suffer from lower back pain, it’s likely that the darkest spots will appear in that area, but as you receive successive treatments, the marks will become lighter and lighter as the underlying condition improves.